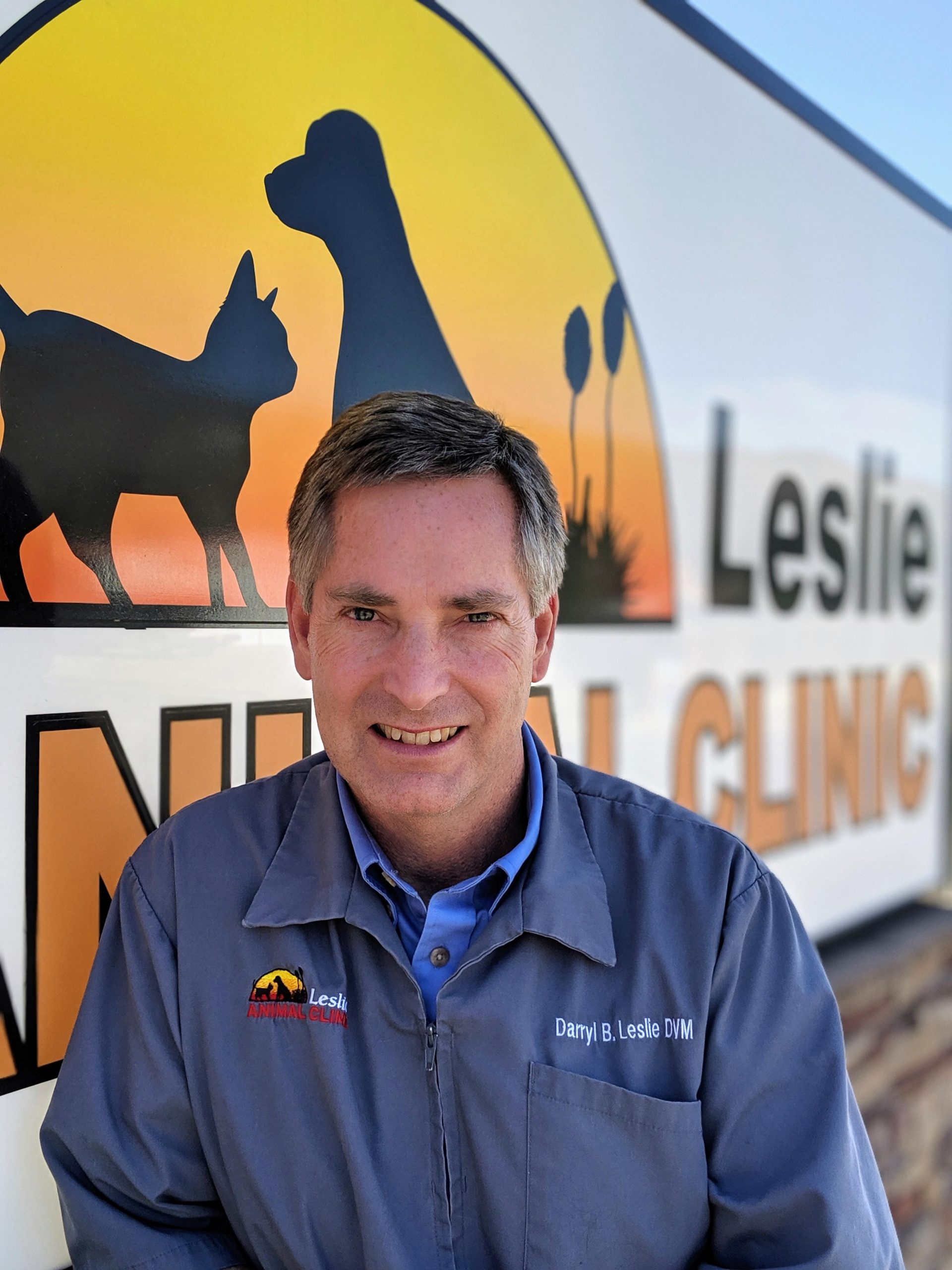 Darryl B. Leslie was born and raised in Alamogordo, New Mexico. He attended New Mexico State University for his undergraduate studies and then attended Colorado State University and received his doctorate in veterinary medicine in 1991. This added a third veterinarian to the family, as his father and his oldest brother, Earl, are also veterinarians. Dr. Leslie joined his father’s practice in June 1991and purchased the practice from him in 1994. The practice, Leslie Animal Clinic, was set up By Dr. Earl Leslie in 1959 and it was a proud day for the family as it passed from one generation to the next.

Dr. Leslie believes it is important to listen to client needs and provide compassionate veterinary health care. He tells us “I believe in working to improve the veterinary profession by being involved in the state and national associations”. He demonstrates this commitment to veterinary medicine by serving in the following positions:

In addition to his community and professional work, he is accredited with the National Veterinary Accreditation Program (NVAP) as a Category 1 veterinarian. He can fulfill pet import and export requirements and issue international health certificates for dogs and cats.

Dr. Leslie married his wife Kim in 1990 and they have three children: Caysen, Dara, and Londyn. Caysen and Dara are married and still live in the Alamogordo area and Londyn is still at home and in middle school. The Leslie’s also have a high spirited Labradoodle named “Dizzy” and a miniature Goldendoodle named “Baylee Grace”. Outside of work, Dr. Leslie’s interests include his family, church (he is a deacon at Bethel Baptist Church), shooting sports, woodworking, gardening, traveling and general “tinkering” with household projects. 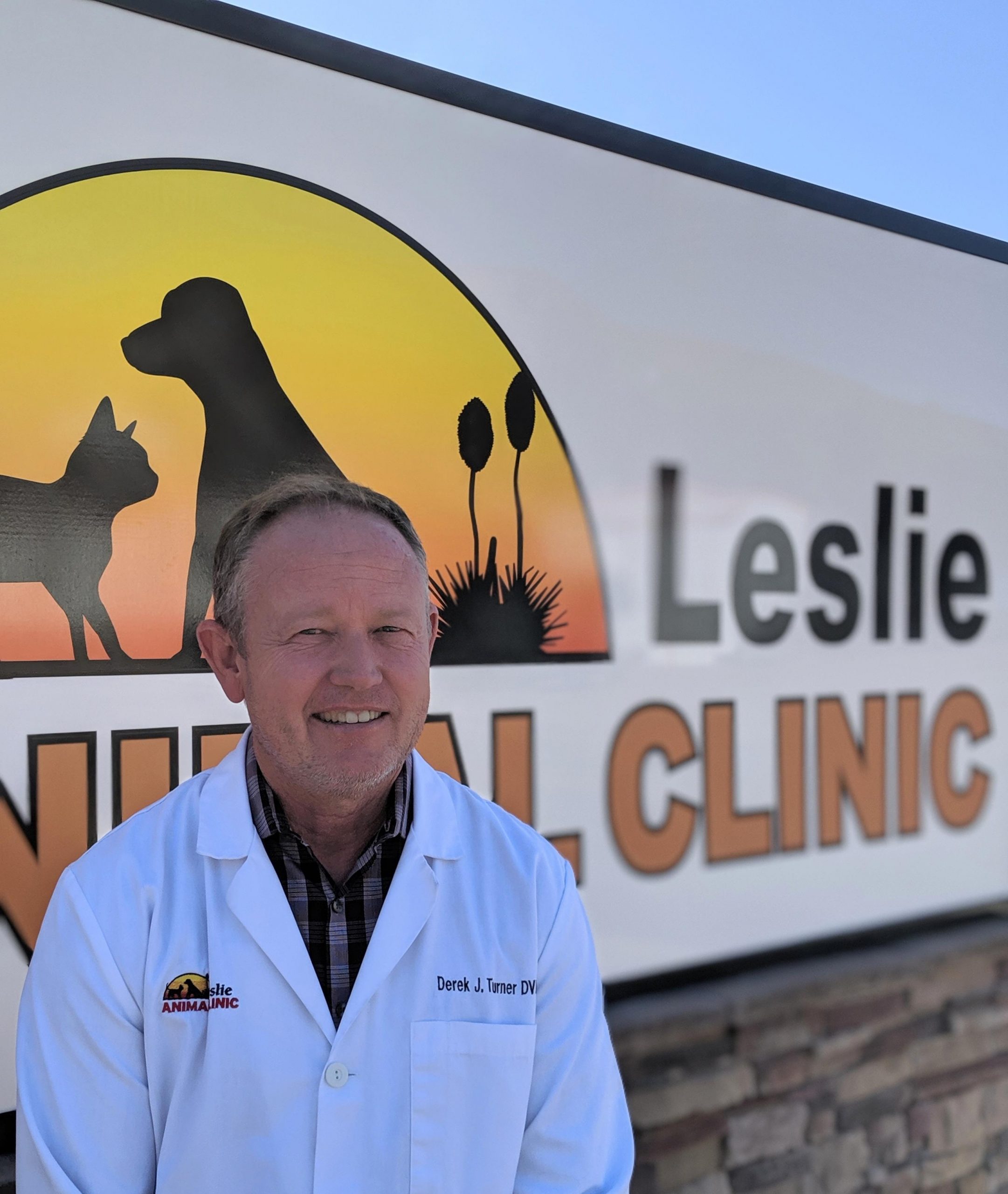 Dr. Turner grew up in a ranching community in central New Mexico. Developing a special interest in biology and chemistry while in high school, veterinary medicine seemed a perfect fit for a challenging and rewarding career. Dr. Turner received his Bachelor of Science degree in animal science from New Mexico State University and went on to receive his Doctor of Medicine from Colorado State University in 1989. He has practiced veterinary medicine in Texas, New Mexico, Arizona, and California. His special interests include soft tissue and orthopedic surgery as well as critical care. Dr. Turner is married to Cheryl Louder Turner who was born and raised in Alamogordo. They have two adult children and a standard poodle named Reba. In his spare time, Dr. Turner enjoys oil painting, sculpting, and traveling. 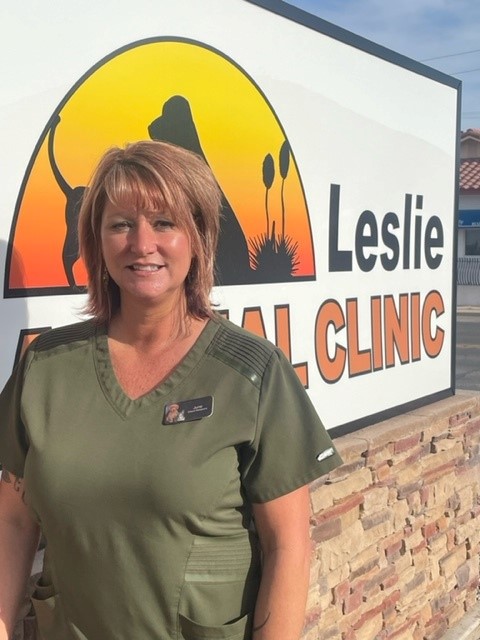 June has been with Leslie Animal Clinic the longest. She started in September of 1995. She has been an animal lover all of her life. Born and raised in Alamogordo, everybody in town knows and loves June. Her smile and vibrant personality make you feel like family the minute you meet her. June is the proud mother of two girls, two bulldogs, a chihuahua, and a cat. In her free time she enjoys spending time with her family and shopping. 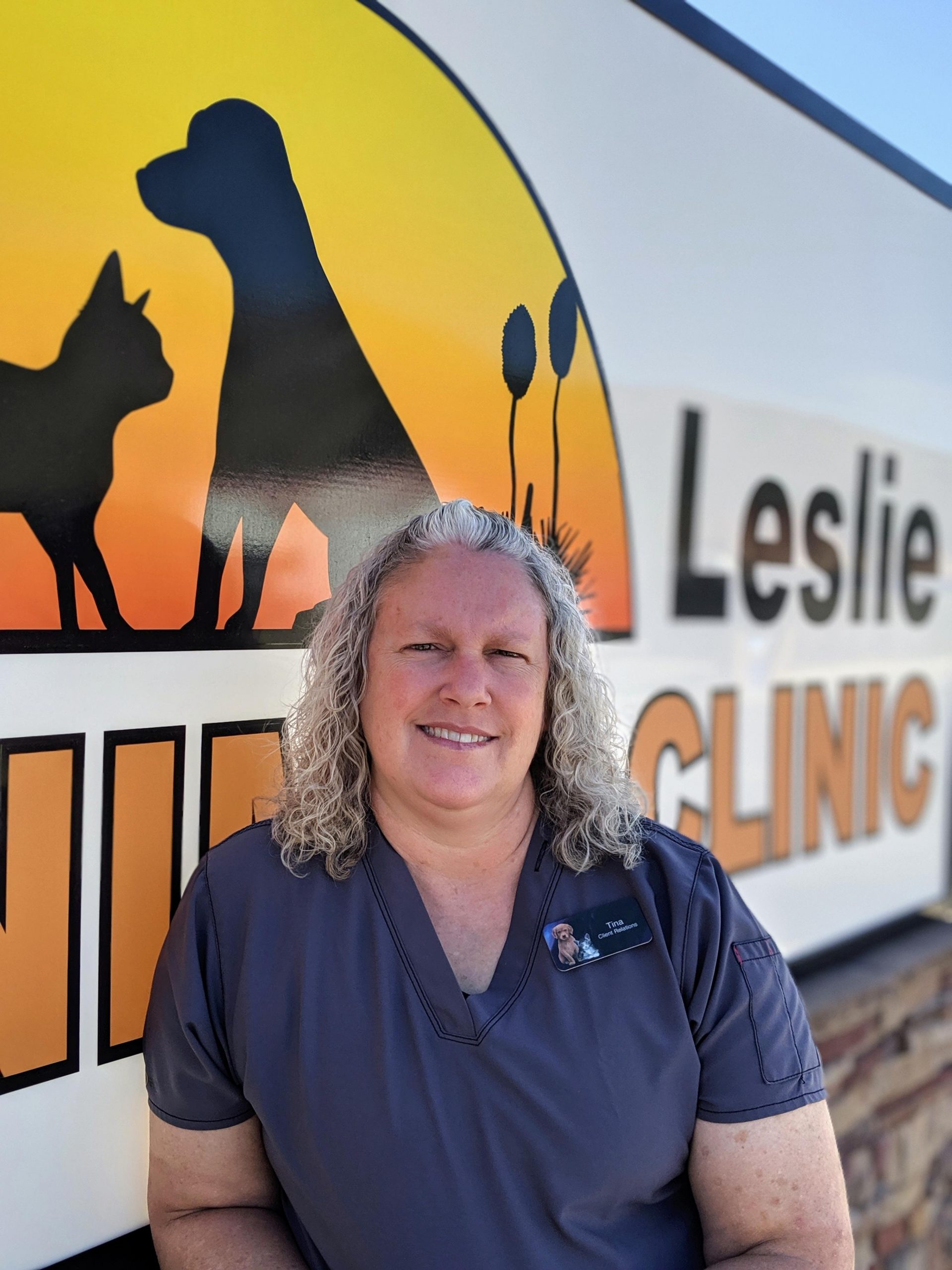 Tina has been with Leslie Animal Clinic since December of 2019. Her first career was as a math teacher at Chaparral Middle School for 22 years. During two summers Tina worked as a tech for the clinic. When she was ready to change careers, she was happy to return to Leslie Animal Clinic to fill a position in client relations. Tina is married to her husband Dale and they have had many German shorthair pointers over the years. They currently have four girls; Abby, Bella, Emma, and Liesl. 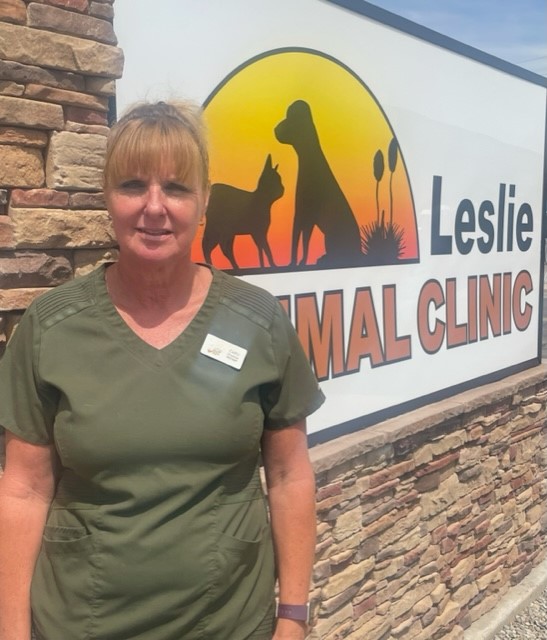 A new puppy in one hand and a resume in the other, Cathy’s journey with Leslie Animal Clinic began in October 2003. After graduating from Alamogordo High School, her career started with the USAF where she excelled in Communications and Computer Systems. She pursued the service industry becoming a manager of a hotel and then becoming involved in Dentistry and Orthodontics.

Growing up with many pets, her love of animals was always close to her heart, so it was a perfect time and fit for this opportunity. Cathy is currently raising a spirited husky “Silver” and a Frisbee-loving Border Collie “Jacky”. In her spare time, she enjoys fishing, gardening, and traveling.

Courtney has been with Leslie Animal Clinic since May 2011, coming to us from the West Texas town of Tulia. She definitely still carries that Texas pride wherever she goes! Courtney is passionate about end of like care and does the best she can as a Certified Euthanasia Technician. Courtney is also certified in small animal ultrasound and echocardiogram. She enjoys being outside working in the yard and gardening. She has found the New Mexico weather perfect for running! 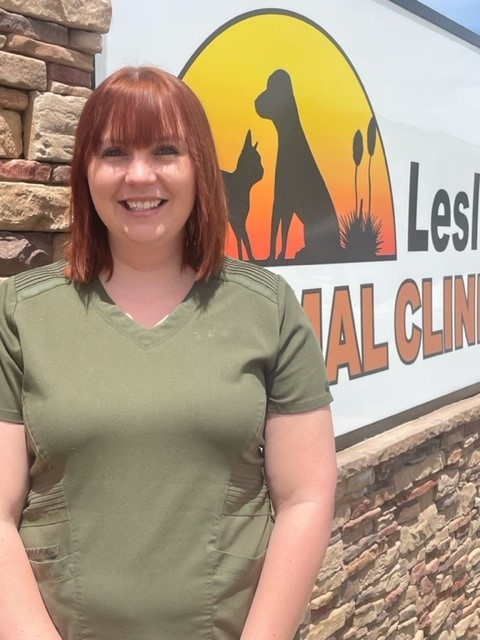 Kristina’s start as a temporary employee during a family emergency has turned out to become full time employment with Leslie Animal Clinic since October 2011. Kristina received her Bachelors in Radiographic Technology and is now qualified to perform Abdominal Ultrasounds. She has decided to stay close to family and now utilizes her skills with the “4-legged furry kind.” Kristina enjoys hiking, concerts and hanging out with friends. Kristina has finally found the BEST hiking buddy ever…a rescued Husky named “Shilo”. 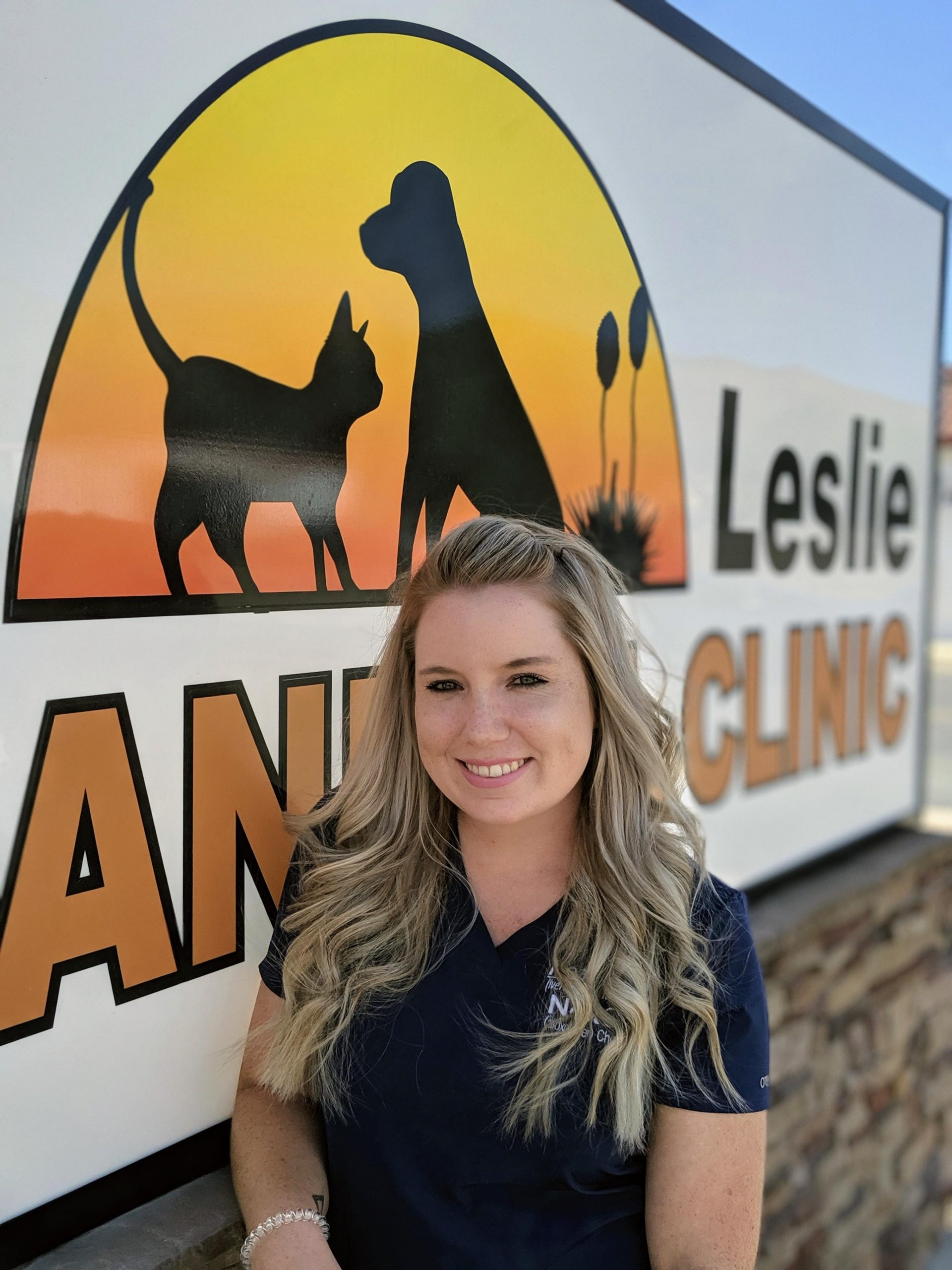 Morgan’s love of animals came at an early age of eight years old. She was a member of 4-H and started out showing goats and through great determination worked her way through lambs and steers. Morgan has been with Leslie Animal Clinic since 2016. She is recently certified in Abdominal ultrasound. She is “country” to the core and is raising Brangus cattle, a red heeler named “Paisley,” and an aussie named “Remi.” 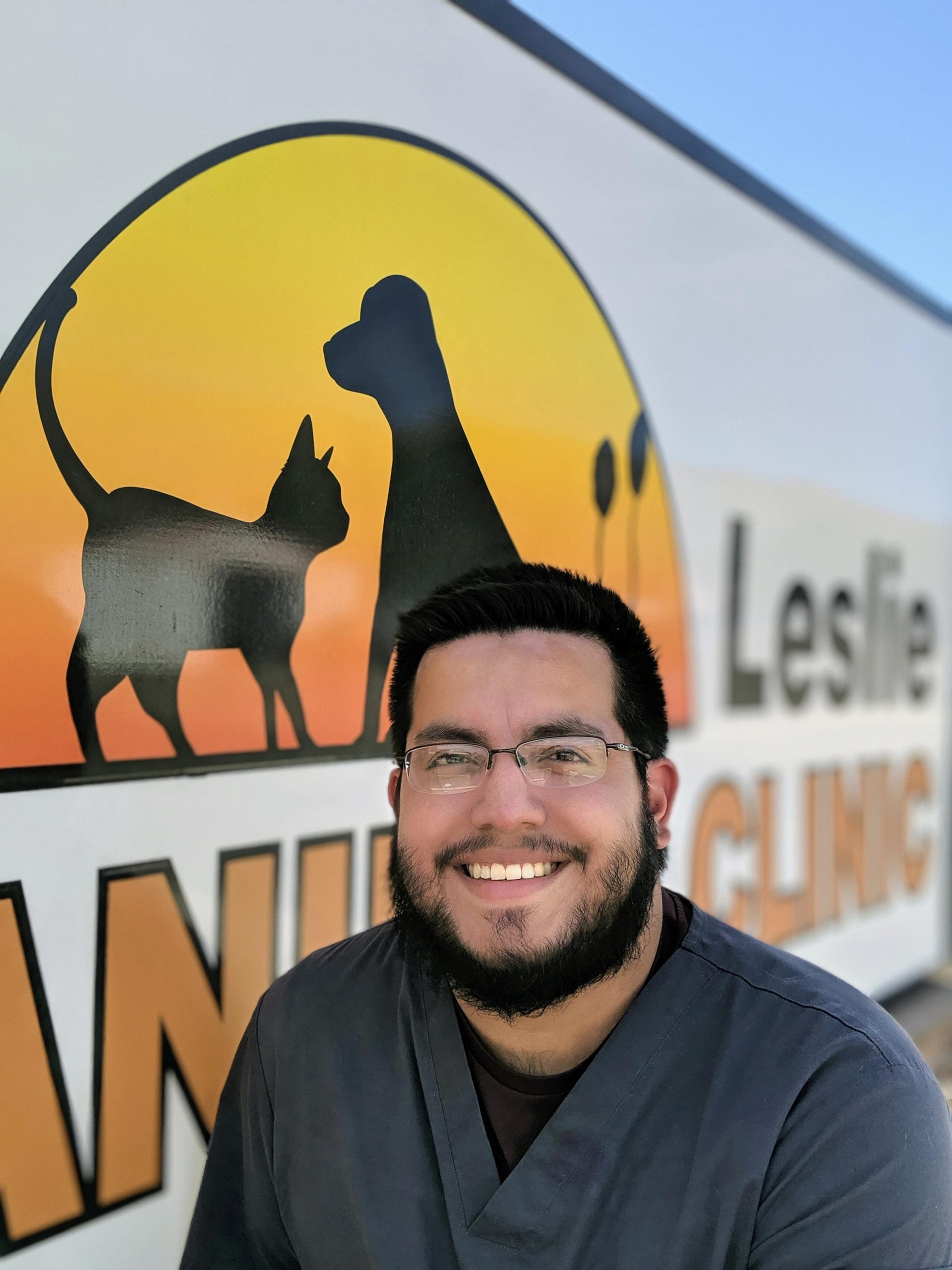 Daniel has been working at Leslie Animal Clinic. He has been working in the veterinary field from the young age of 15. He has a bachelor’s degree in animal science with a minor in chemistry. He is currently applying to vet school and hopes to begin in 2022. He has two dogs and tortoise. He hopes to be getting a snake soon. Daniel enjoys hiking and is a big time nerd with his favorite super hero being “Batman.” 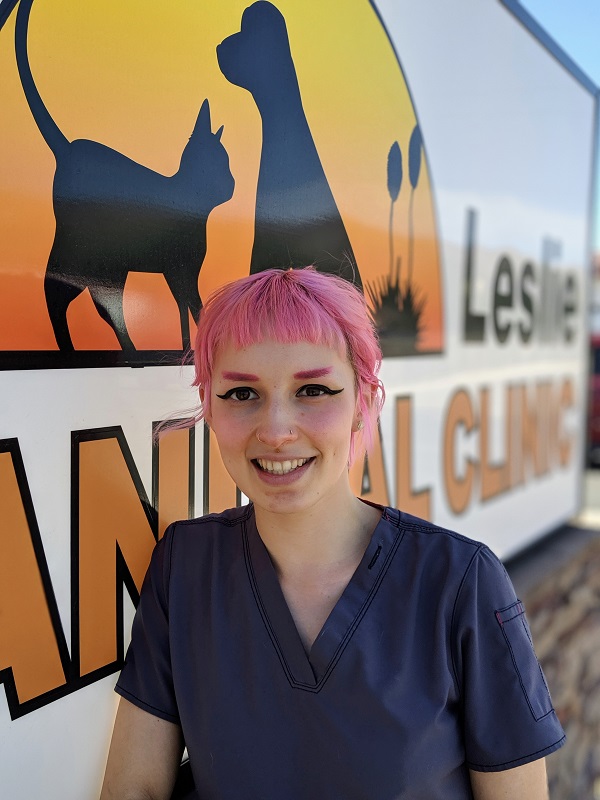 Carise has been with Leslie Animal Clinic since November of 2019. Carise knew she wanted to work in the veterinary field ever since she was three. She saw an episode of Sesame Street that featured a veterinarian and told her mom she knew she wanted to care for animals when she grew up. Fast forward to today, Carise is currently working to achieve her degree through Penn Foster’s Veterinary Technician program. She can frequently be found singing to her patients and coworkers while trying to provide the best care she can for each and every pet. At home, she and her husband happily parent their one human son, two dogs, four cats, several chickens, and a tarantula.” 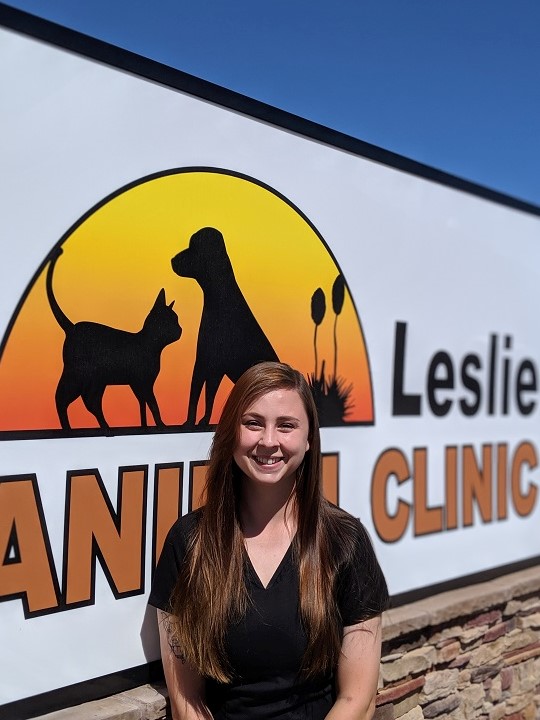 Kristen was born and raised in Alamogordo. She graduated from Alamogordo High School and then attended New Mexico Tech University where she received her B.S in Biology. She is currently in the process of applying to vet school and hopes to be accepted for the 2022 school year. Kristen has been working for Leslie Animal Clinic since August of 2021 but has been working in the field for three years.

Kristen is very much an animal lover. She is the “mom” of three dogs, two cats, and two snakes. 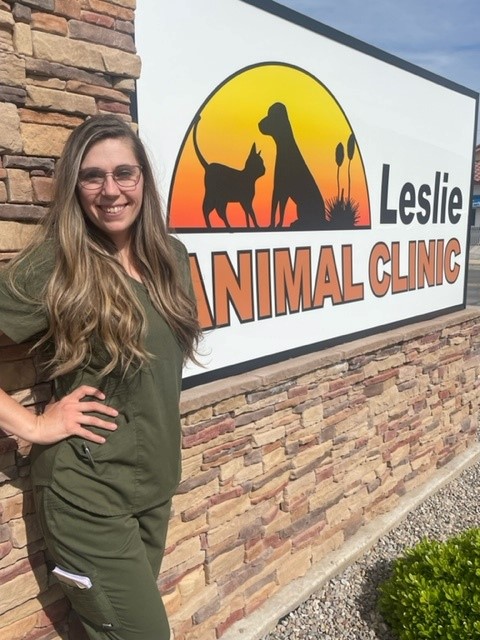 Marisa joined our team in March 2022. She is married to her best friend and they have three boys! She is an all-around animal lover but her favorite is her tripod pit Blue. She has plans to become a veterinarian and is currently going to college at NMSU-A. On her free time, she enjoys board games, going to the movies, and all things Disney! 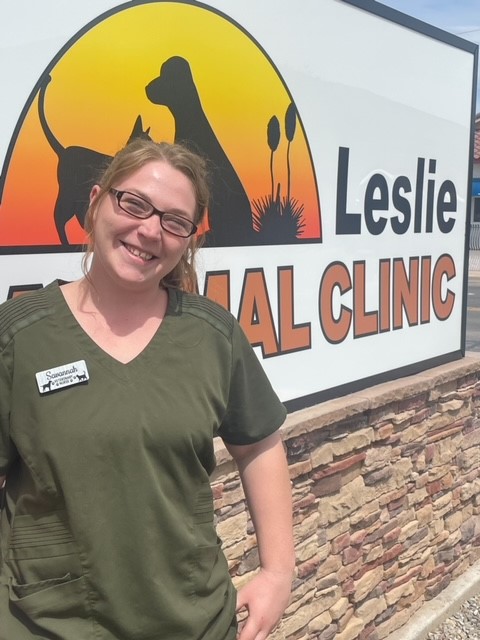 Savannah was born and raised here in Alamogordo. She recently graduated form NMSU-A with an Associates of Science and is planning to continue her education in Veterinary Technology. Her love for animals goes back to as long as she can remember. She has 2 dogs, Laya, a great pyradane, and an onery chihuahua named Domino. Along with her dogs, she has 3 other big fur babies: her horses, Delilah, Minnie Pearl and Vanilla Shake! In her free time, she enjoys the outdoors, playing video games, and spending time with family and friends. 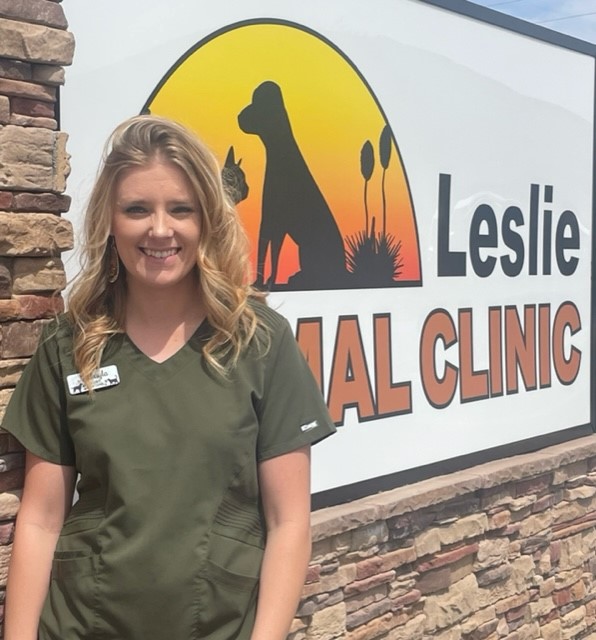 Makayla started with us in March 2022. She worked in customer service for 10 years as an assistant manager at Tractor Supply prior to joining our team. Whether it was showing animals in FFA or doing rodeos at a young age. Makayla has always had a love for animals. She and her husband have a small ranch outside of Alamogordo where she raises 2 horses, 4 dogs, cows, chickens, a wild 2-year-old daughter, and has a little one on the way!